Posted by David Smith on Friday, 05 December 2014 in Stories From The Field

Picture above from Listen 2 Uncle Jay and apparently taken in Tatarstan Russia. Good to know that "business launch" is not just a Moldova phenomenon :)

If you live in Moldova or have ever traveled here one question sticks out above the rest in terms of how constantly it is encountered and how frustrated it is bound to make any westerner.

of items listed that they do not have. Furthermore why won't anyone, anywhere, just tell me what they have instead of making me guess half a dozen times before I hit something they will serve?!

Sadly part 2 of that question will forever remain a mystery. Matt and I once guessed every single beer on a menu (7) before realizing that a.) they only had non-alcoholic Chisinau and b.) the waitress had absolutely no intention of telling me that, preferring instead to say "no" to each one in succession. 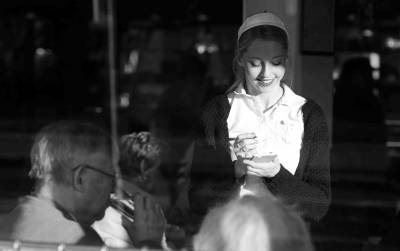 quota today! soon I get to move on to "I don't know"

The good news is that today we are going to answer the first part of the question. Why are menus so big and why don't they ever have anything? To do that we need to descend back into the world of Moldovan bureaucracy. But first...

What is a menu anyhow and how are they made?

In theory this question has a simple answer. The menu is the list of things I want to serve to my customer and I make it however I damn please. At Ann's Snack Bar in Atlanta for example you pretty much eat the Ghetto Burger (Wall St. Journals' #1 burger in America 2007) she puts in front of you or she throws your ass out (something I have witnessed). That is their menu. Most places however have their basic menu + (maybe) a specials menu + (maybe) a chalkboard showing a "soup of the day" or something. Anyone who has ever lived in Moldova knows that none of that is the case here. The menu is very formulaic with Appetizer, First Dish, Second Dish, Meats, Fish, etc etc and is very very long. Only very modern places have pictures on the menu and everything is presented by weight (like the picture of the menu above with the o-so-delicious sounding "Salad Green Madness"). The reasons for these major differences between Moldova and countries outside of the post-Soviet world begin with...

The Health Department and their "Food Lab"

In Moldova the Health Department not only...

They do all of this via a giant Recipe Book of literally every recipe recognized as valid by the Moldovan Government. 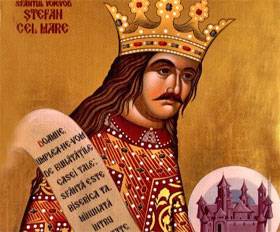 I, Stefan Cel Mare, King of Moldavia, Saint, Scourge of the Ottoman Empire,

cousin of Vlad "Dracula" Tepesh, and bequether of many road names

do hereby declare this scroll to be the final word on mashed potatoes.

In order to serve something in your restaurant it must be in the book. If it isn't in the book you must submit your recipe to a "food lab" so that they may recreate it (to make sure you weren't lying?) and then they put it in the book. You can imagine that this involves fees, time, lots of people who say "I have no idea" as a career, and more time. I can. We'll see because I'll update this post after we go through this whole process.

In the mean time I can explain a bit more of how this works. After the recipes are selected or submitted and returned you are given official "recipe cards" which are (naturally) officially stamped to indicate their relative importance when compared with your grandmother's recipe for mashed potatoes. These recipes are then placed in your kitchen and used by your staff. They must be followed exactly or there are consequences but more on that later. Let's see how this relates to menus...

So you have your recipes. They are awesome food is awesome AND the card is stamped. Time to make a menu. Print out a sheet of paper and write all the stuff you want to serve on it. Be sure to include the weights of the items as that is required by law. I'd like to think this is a kind of (misguided) attempt at consumer protection but seriously who knows. Also stamp every page of your menu with your company stamp because otherwise it could totally be a fake menu that that lunatic down the street keeps putting on your tables (evidently a problem here before the advent of the stamp system?). Finally you get the Health Department to check and approve your menu. You now have your menu. Congrats. We're done here right?

Coulda seen that coming. You see the problem occurs when you want to do anything not on the menu or the recipe cards. For example...

Why are all these things problems? because every time you change the menu you need to register the change with the Health Department. This triggers a new health inspection for your restaurant. Unless you want that kind of hassle, fees, under the table fees (if you pay those) and random scrutiny every time you offer a soup of the day then you're shit outta luck. Those are the rules. Want fries with that steak instead of mashed potatoes? Is that variant on the menu? if not, no. Hosting your kid's birthday at my restaurant and he loves bananas so you want me to make a banana cake? shit. outta. luck.

Anyone see where this is going? If you've been to Moldova you do.

This is why the menus are so long. They need to list everything they ever would conceivably want to cook for weddings, events, parties, seasonal dishes, etc. This is why they never have those things.

Restaurateurs in Moldova aren't stupid. The majority I've talked to have been the clearest eyed business people I've talked to here and they are generally super helpful and open. They understand that this system is stupid and outdated. Some of these laws date from the 1970s before they were legally called capitalists or even business people. People know this needs to be changed or "gotten around" the question is how.

Firstly, I'll give a rare shout out to the Moldovan Government. Most people I've talked to say this is in effect a "Dead Law" meaning it's still on the books but the recipes and menu oversight isn't enforced. In this way the government realized "this silliness isn't worth our time" and moved on to better things (presumably finding ever more interesting ways to make foreign investment difficult). This doesn't mean that you don't have to do everything I mentioned above (submitting the recipes, getting the menu approved, etc). It just means that if you make changes later no one cares (maybe?, we hope). The problems with this are twofold. One, any unenforced law is an invitation for someone "in the know" to come and jack you up for "on the spot fines." This is especially true of something like this where compliance is so tedious compared to what you want to do (soup of the day - seriously why do they hate my seasonal curry pumpkin soup so much?). This fear alone keeps people in line. The second problem is accounting which I will explain in a moment.

Firstly, I want to mention a few interesting ways around this mess. The main one, that Andy's and the big chains seem to use is having multiple menu inserts based on season ("menu de post," etc). Another is the "Business Launch [sic]" as shown at the top of the page where they rotate "specials" based on the day. Obviously this isn't that fun because you KNOW that every monday is that cool thing you like but you're busy and ever friday they have the white rice and pork-broth special. Even if they were good though there's no variation or surprises. These are at best partial solutions.

The most creative solution I've seen is Gastrobar's "Test Menu." Now I haven't talked to the owner about this (if any readers know him/her please introduce me) but this seems pretty clear to me. If anyone asks tell them it's not permanent. Fullstop. Pretty creative if you ask me.

The Problem With Anything but Legal Reform - Accounting

Finally I will explain where the "recipe cards" get truly devious. Even if the Health Department never comes by and checks that you are using exactly as much cumin as you said you would per kilo of pork shoulder the Moldovan IRS does. That's because these recipe cards get entered into your official accounting tallies. So does the menu. For example, if I say that we use 1 cup of sugar and 1 cup of salt per x liters water to brine x kilos of meat and I decide to put less meat in the brine one night I'm responsible for spending according to the recipe. Meaning that if the recipe says that I should have used 1 kilo of sugar and I used 2 the company cannot legally buy the second kilo. Conversely if I was supposed to use 2 and I used 1 then I am subject to a government fine.

Consider this a little teaser to upcoming posts about the accounting system here. We're quite new so we have a whole lot to learn on this front. That said, I am pretty ready to say that the accounting rules in Moldova are the single largest compliance problem for business here AND are structured in a way that yields far fewer taxes than owed. Anyhow, all that is to come.

In other news, now you know why the menus are so long here and they never have anything. And here I just thought they were being silly...

David Smith
(Site Admin, Entrepreneur, Contributor)
David is a native of the great Commonwealth of Virginia and lived there through high school in Fairfax County. After high school he pursued a degree in Electrical Engineering from the Georgia Institute of Technology in Atlanta Georgia. During his studies his traveled to Singapore for a semester and gained a respect and love for traveling and immersing in different cultures. After graduation David joined the United States Peace Corps and was posted first in Kazakhstan as an English Teacher and later in Moldova as a Community and Organizational Development Consultant.

When not working on his startup David can be found maintaining various web based side projects (check out: salutmoldova.org) and working on his 1986 Lada Жигули 2101 named Надя (Nadia).
Author's recent posts

This work is licensed under a Creative Commons Attribution-ShareAlike 4.0 International License.